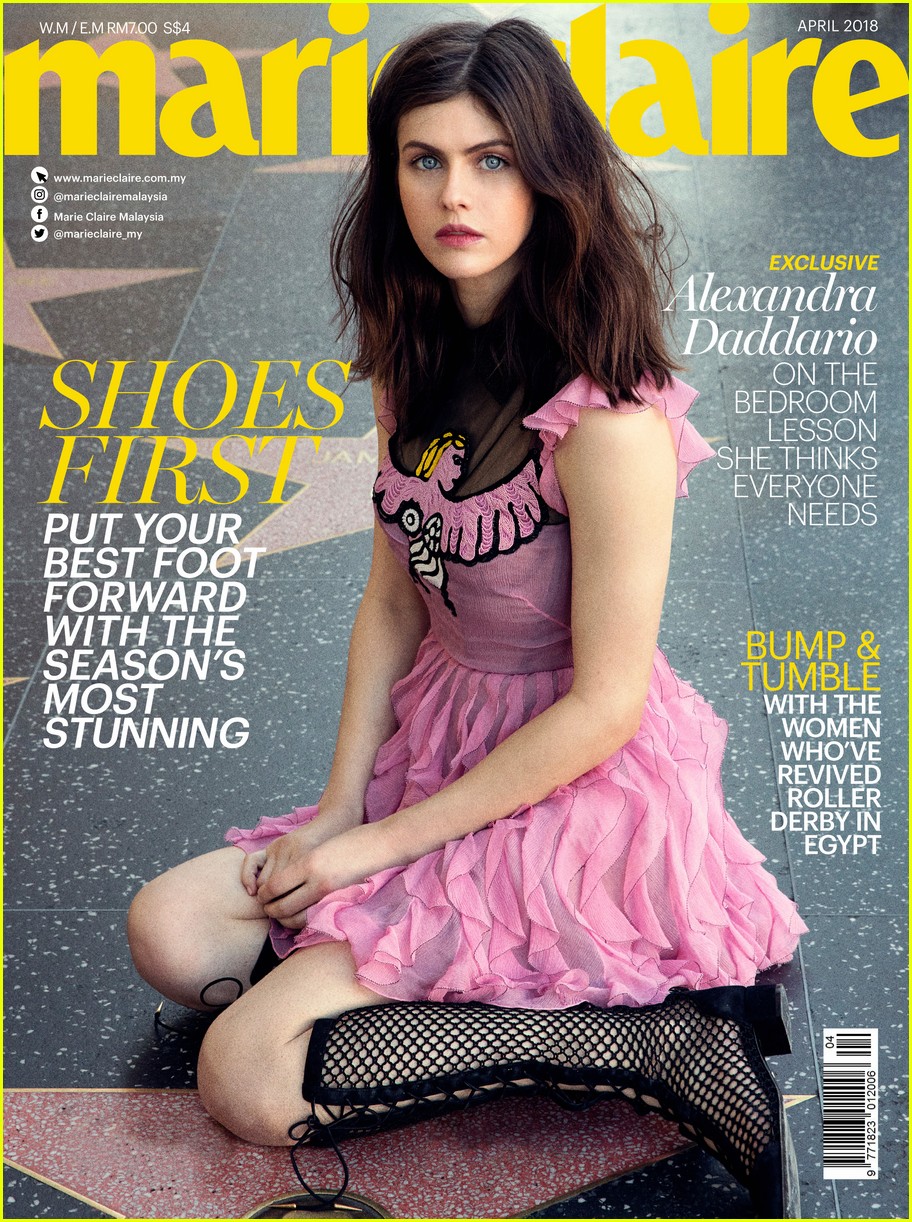 With her latest projects taking over the music industry and Netflix, actress Alexandra Daddario exudes grace, humor, and elegance on the latest April 2018 issue of Marie Claire Malaysia. In the April issue, the True Detective actress reveals her thoughts on the #MeToo movement and the fight for equal rights.

As we previously mentioned, Daddario shows off her comedic chops, alongside Robbie Amell (The Flash) and Adam DeVine (Modern Family) in the time-travel romantic comedy, When We First Met. Daddy can also be seen in the music video, “Wait” for Maroon 5. Now the 32-year-old starlet discusses what it means to be a woman and her pop star dreams.

According to JustJared, The Texas Chainsaw 3D scream queen dishes, ““Lady Gaga has my dream life. She’s a pop star, and also gets to act. And she gets to wear the most insane clothing and dance around onstage. There is an empowerment I feel you have when you are a pop star.”

The Percy Jackson actress states, “There is a lot I have struggled with, and women I know have struggled with. Although it’s (suppressing the bad things that have happened and being strong and moving on) a testament to women’s strength, it is also a huge society problem of women not being able to speak up or being afraid to speak up, or thinking that things should be one way when they really shouldn’t be that way, and I think that’s what we are grappling with right now.”

Our cover moves. So now everyone can see the shoot in all its glory. Thank you Pedro! Our Cover celeb @alexandradaddario speaks to me about the issue of gun control, as in the first two months of 2018 alone there had been eight cases of shootings in various places of education. “It’s crazy to me that speaking on record on gun control would be a controversial topic, and yet it is. For some reason, everytime someone says ‘look, I don’t want guns in the hands of mentally ill patients’, you get all these people freaking out that you are trying to take away their gins and that’s just not the case!” Shot in @thehollywoodroosevelt Video Director @thepedrochannel & @mitchellmccormack Photography @mitchellmccormack Fashion Director @azzaarif Makeup artist @elienmaalouf Hair stylist @bridgetbragerhair Manicurist @painted_lolly #alexandradaddario #cover #editorial @dolcegabbana @dior @maxmara @emiliopucci @michaelkors #StyledbyAzzaArif #marieclaire @marieclairemalaysia

The Baywatch Star states, “I’d like to see women get equal pay, obviously. I would like to be payed equally to my male co-stars. I think that there should be more opportunities for women. I think it’s absurd that there are roughly only 12 percent of movies that are directed by women.

Daddario mentions, “I know in the past when something happens, a; there’s a huge deal of shame, and b; if you do speak up, you are sort of shamed to silence. So I think that’s what’s changing and that’s what’s important.”

She adds, “I’d like to see that when something is wrong, women can have the courage and platform to speak up and people will listen.”

When We First Met is on Netflix now. Pick up the issue of Marie Claire Malaysia, with Alexandra Daddario, on the cover here.