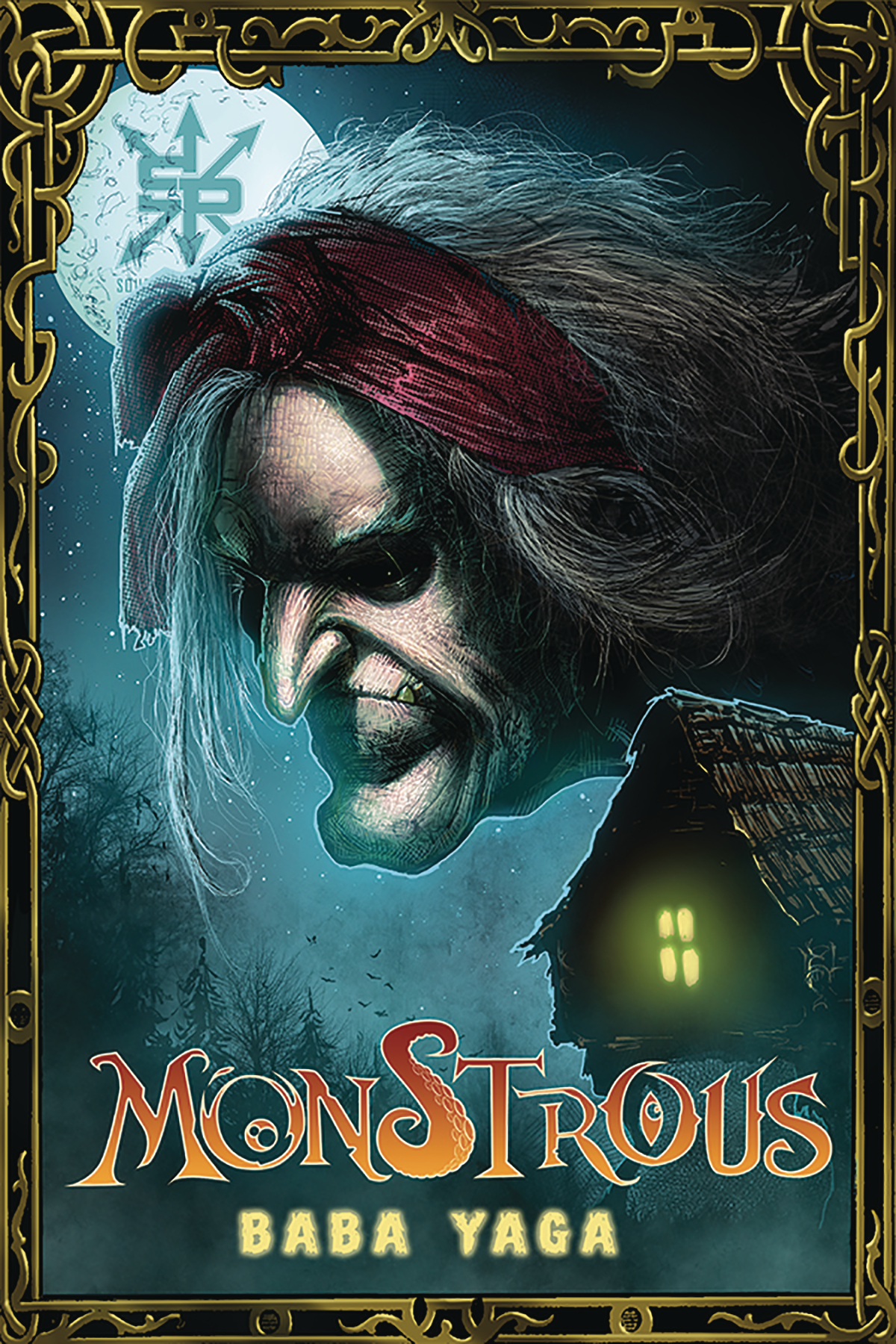 An amusing black comedy, Monstrous: Baba Yaga (Source Point Press) is an entertaining supernatural thriller that confidently mixes scares with laughs. With a feminist message at the story’s core, Baba Yaga will cast a meta spell onto its readers.

Three witches break into a chicken-legged house to steal the magic of the meanest, toughest witch in the entire world: Baba Yaga! But things immediately go wrong when they succeed. Now Baba Yaga is out for revenge. Armed with steampunk weapons and surprising action moves for an old Russian lady, Baba Yaga takes on the thieves and all the magic of an entire witches’ convention. Enjoy the chaos as Baba Yaga gets monstrous!

Here are 5 reasons why you should read Monstrous: Baba Yaga:

Looking to dive into the world of MONSTROUS but don’t know where to start? Worry not! This series is designed so that you can jump in almost anywhere and immediately get in on the fun! The setting: Frankenstein’s Europe! Creatures of all sorts are rising up in a new Era of Monsters and Dr. Frankenstein has turned his efforts toward steam technology to build an army of robots to police Europe! The comics: Monstrous #1-4 is a series of one-shot stories in this world. Read in any order! Collected in Monstrous Vol. 1: Tales of Valor and Villainy. In Monstrous: European Getaway #1-4 all the characters met in the 1st mini-series cross paths and their stories intertwine! Collected in Vol. 2: European Getaway. After that are the one-shot comics Mad Dash, Baba Yaga, and Sunken Treachery! They don’t require prior reading and each builds the world and its characters out further for more monstrous fun! All of these are available to order at SourcePoint.Press. Want to just dip your toes in to get a feel for the series? Order Monstrous #3 or #4! They’re one-shot stories so you can dive right in without worry! End up loving it? Come back and nab the trades. ? #steampunk #horror #monsters #classichorror #dracula #frankenstein #universalmonsters #comicbooks

Writer Greg Wright cleverly uses witchcraft as a way to repair a broken life as much as means for revenge. Baba Yaga used to be a hardcore OG back in her day, but now she has competition from younger players. The lettering by Dave Sharpe focuses on the psychological study of a flawed protagonist, who searches for a new identity after suffering a breakdown.

Artist Stan Yak captures the themes of youth verses experience as Baba Yaga confronts her three younger competitors. Through Yak’s pencils and inks, notice how Baba Yaga turns to steampunk aesthetics in order to seek out vengeance. In Baba Yaga’s character design, her movements become energetic and less frigid after she goes on a killing spree at the witches convention.

Colorist Robert Nugent captures an old-fashioned storybook tale in the opening pages. Nugent then drenches Baba Yaga in shades of gray to capture her wrinkles and sagging skin. Notice how the color red stand outs because of the rag wrapped around Baba Yaga’s head.

Throughout the narrative, readers are embraced with relatable themes about mortality and identity. Now that she has become a sad-sack, Baby Yaga used to be professional, but now she has become so weary of the game. Her race to get back to the top now seems like a reflex.

Filled with promising characters, Monstrous: Baba Yaga is an exciting revenge thriller to read. At Villain Media, we root for the Big Bad and this Monstrous story makes us root for Baba Yaga tenfold.