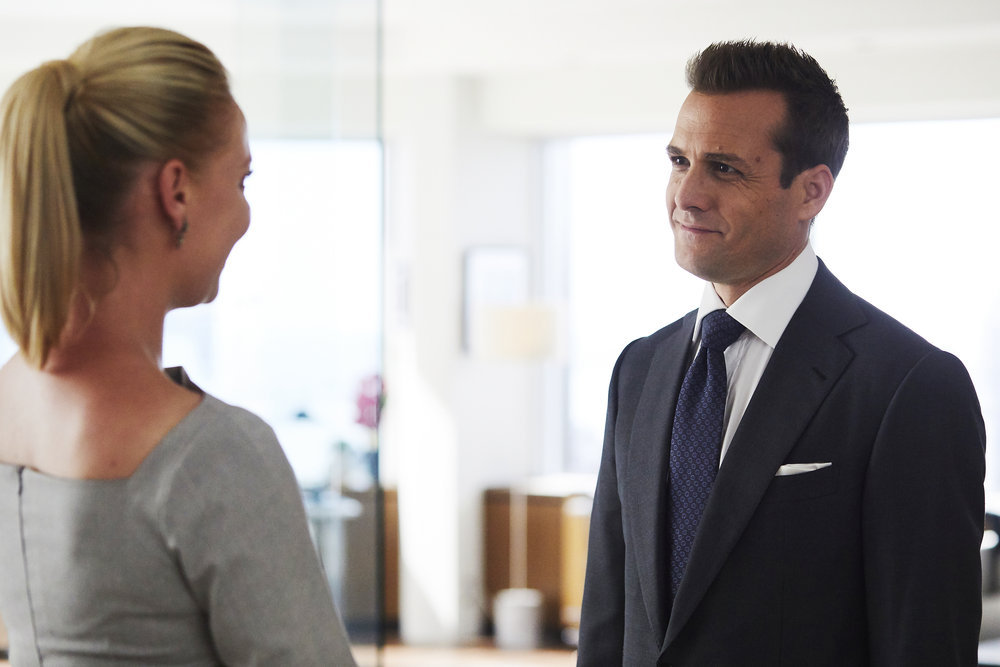 Gretchen (Aloma Wright) is ordered by Alex (Dule Hill) to make sure a package full of important documents are delivered. Unfortunately, Gretchen’s package gets mixed up with Donna (Sarah Rafferty)’s papers. Alex’s package hasn’t even left the room.

When Gretchen discovers the package in Donna’s office, she tries to make it right. Gretchen’s plans to save the day are ruined and she gets yelled at by Alex. In order not to lose his client, Alex has to fire Gretchen for this mistake.

An old case from Samantha’s past comes back to haunt her. Desperate for help, Samantha reveals to Harvey that she got rid of evidence to help an innocent woman. During a late night, while eating pizza, Samantha comes up with a plan to save her career.

Louis Litt (Rick Hoffman) and Sheila decide to see a doctor if she can be impregnated. His diagnosis says there’s a chance they can still have a baby. But when Louis sees the name, he remembers being bullied in high school.

Though Sheila and Louis are worried about the news of surgery, he cannot stop thinking about his bully. The man who’s supposed to operate on his wife, tortured him in high school. But Louis puts his anger aside and says nothing about it.

Feeling unsatisfied, Louis turns to Dr. Lipschitz (Ray Proscia) for advice and dives deep into his mind. He meets his younger self in his dream. Louis promised not to raise his kid like a bully.

Samantha finally settles her old score. Unless her enemy meets the client’s demands, Samantha will reveal an old document that has his name on it. If Samantha goes down, she’s taking him with her.

Donna attempts to comfort Gretchen, who feels like she’s run out of juice. She tells Gretchen that this mistake doesn’t mean her time is over. Convinced to stay, Gretchen hopes Donna will find someone who will stick with her through and through.

Louis meets with Samantha, who refuses to bend her will. Samantha would make the same decision again to save an innocent woman.