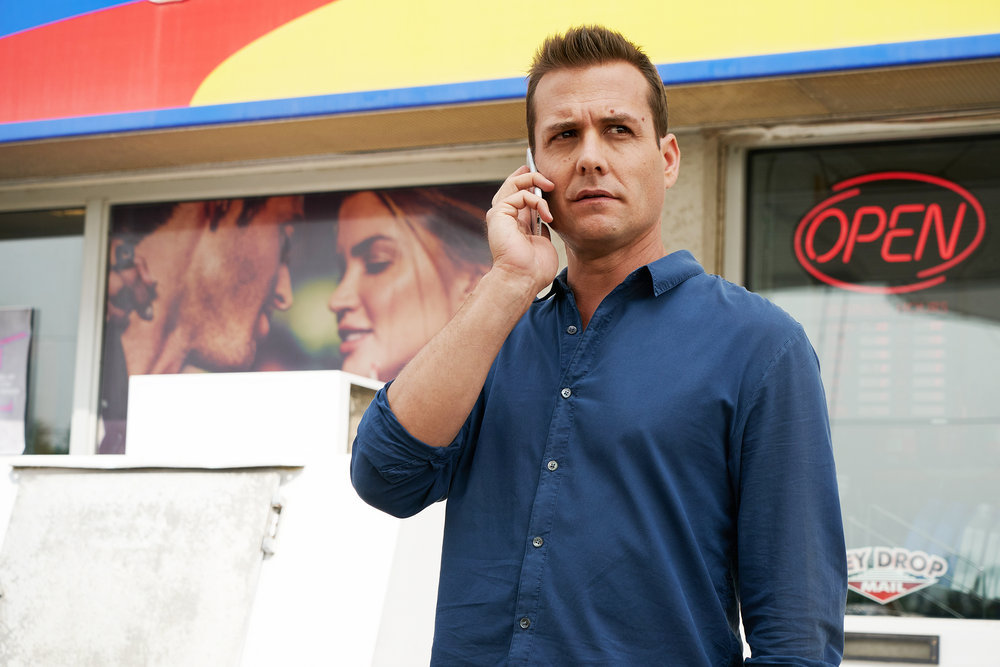 Harvey decides to join Samantha on a trip to her childhood and meet her real parents. With a name and address, the duo head off onto their road trip. Meanwhile, Donna (Sarah Rafferty) and Louis Litt (Rick Hoffman) attempt to pick up the slack with Harvey gone.

At a lunch meeting, Louis ends up pretending to be Harvey to convince a client to sign. While negotiating a deal, Louis hopes Harvey doesn’t end up finding out what he did. Unfortunately for Louis, someone does snitch on him and calls Harvey while he’s out at a gas stop.

Even though Harvey should be mad, he decides to have fun with Louis. Samantha and Harvey end up playing a fun prank on Louis before their car suddenly gets a flat tire. Samantha is getting anxious and nervous and As Harvey struggles to get a signal.

While Samantha is stranded on the road, Alex (Dule Hill) does a major favor for Donna. With the help of Katrina (Amanda Schull), Alex is able to bring in an important piece of art. The painting is actually a gift from Donna to Harvey.

Nervous about the answers she will find, Samantha does end up meeting her real father. Her father didn’t even know Samantha existed. Her mother kept the pregnancy a secret and passed away when Samantha was two years old. He would have done something if he had known Samantha was born.

Louis decides to be himself in order to close the deal. After working out a better deal for the client, he tells Katrina it may be good to be Harvey, but it’s even better being him.

Knowing her parents did not give her up, Samantha still has so much anger within her. Harvey advises her to let go of the pain and she will feel better for it. Harvey confesses how he couldn’t forgive his mother after she cheated on his father; which nearly ruined their relationship.

Back at his apartment, Harvey sees the gift Donna brought him. He decides to make a call to his mother and asks for forgiveness.